As the saying goes, "everything grows on the sun." Light is the basis for the survival and reproduction of life on earth. The photosynthesis of crops cannot be separated from light. The quality of light directly affects the yield and quality of crops. For a long time, the artificial light sources used in the agricultural lighting field mainly include high-pressure sodium lamps, fluorescent lamps, metal halide lamps, Panel Lights, etc. The outstanding disadvantages of these light sources are high energy consumption and high operating costs, which account for about 40% of the system operating costs. %～60%. With the rapid development of LED technology, the application of low-energy, high-efficiency light sources in the agricultural field has become possible. LED Plant Lights are considered to be the most promising artificial light sources in the agricultural field in the 21st century, and have good development prospects.

LED can emit monochromatic light needed for plant growth, and the combination of red and blue LEDs can also form a spectrum that is basically consistent with plant photosynthesis and morphology. The light energy utilization efficiency is 80% to 90%, and the energy saving effect is extremely significant. . In many occasions such as greenhouses, plant tissue culture, plant factories, and edible fungus production, LED plant growth lights can be used instead of traditional light sources.

Since 1994, Japan has begun to experiment with LEDs as the lighting source for plant factories, using a combination of red LEDs with a wavelength of 660nm and 5% blue LEDs to cultivate lettuce and rice crops in artificial plant factories, which has been successful. Since the 1990s, countries around the world have been actively using LEDs as light sources for tissue culture. 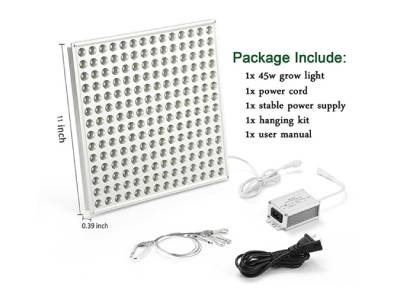 Artificial lighting is a common method for greenhouses, and artificial light sources are especially indispensable environmental control equipment for multi-span greenhouses. At present, the world's greenhouse area reaches 2.835 million hectares, of which China accounts for more than 86% of the world's total area. Artificial supplementary light and lighting are the most important application methods in the field of LED agriculture. Using LED Grow Lights as the supplementary light source for greenhouses not only has a significant energy saving effect, it is estimated that the range is 50%-60%, but also can improve the spectral distribution of the greenhouse , To promote plant growth, increase yield and quality, and the market prospects are extremely promising.

According to statistics, there are currently more than 300 tissue culture enterprises nationwide with an annual output of more than 10 million seedlings, and more than 5,000 small tissue culture workshops and laboratories. The total area of plant tissue culture is more than 20 million square meters. Around 20 billion yuan. The research of LED in the field of tissue culture started earlier and the technology is relatively mature. With the further reduction of the cost of LED, it is gradually possible to popularize the special light source for LED tissue culture.

Previous How To Use Plant Growth Lights Correctly